Stigmata (Ancient Greek: στίγματα, plural of στίγμα stigma, 'mark, spot, brand'), in Christianity, are the appearance of bodily wounds, scars and pain in locations corresponding to the crucifixion wounds of Jesus Christ, such as the hands, wrists, and feet.

Stigmata are exclusively associated with Roman Catholicism. Many reported stigmatics are members of Catholic religious orders St. Francis of Assisi was the first recorded stigmatic. For over fifty years, St. Padre Pio of Pietrelcina of the Order of Friars Minor Capuchin reported stigmata which were studied by several 20th-century physicians. Stigmata are notably foreign to the Eastern Orthodox Church, which professes no official view on the matter; the first and only stigmatics have been Catholics who lived after the Great Schism of 1054.

A high percentage (perhaps over 80%) of all stigmatics are women. In his book Stigmata: A Medieval Phenomenon in a Modern Age, Ted Harrison suggests that there is no single mechanism whereby the marks of stigmata were produced. What is important is that the marks are recognised by others as of religious significance. Most cases of stigmata have been debunked as trickery. Some cases have also included reportings of a mysterious chalice in visions being given to stigmatics to drink from or the feeling of a sharp sword being driven into one's chest.


The odour of sanctity (also spelled odor), according to the Catholic Church, is commonly understood to mean a specific scent (often compared to flowers) that emanates from the bodies of saints, especially from the wounds of stigmata. These saints are called myroblytes while the exudation itself is referred to as myroblysia or myroblytism. There is a theory that the odour of sanctity is due to the smell of acetone and/or acetoacetic acid, caused by ketosis brought on by starvation from fasting.

Oil of Saints - the term also refers to "the oil in the lamps that burn before the shrines of saints" or "the water that flows from the wells near their burial places", or "the oil and the water which have in some way come in contact with their relics.

Marie Rose Ferron (24 May 1902 – 11 May 1936), often called the Little Rose, was a Canadian-American Roman Catholic mystic and stigmatist 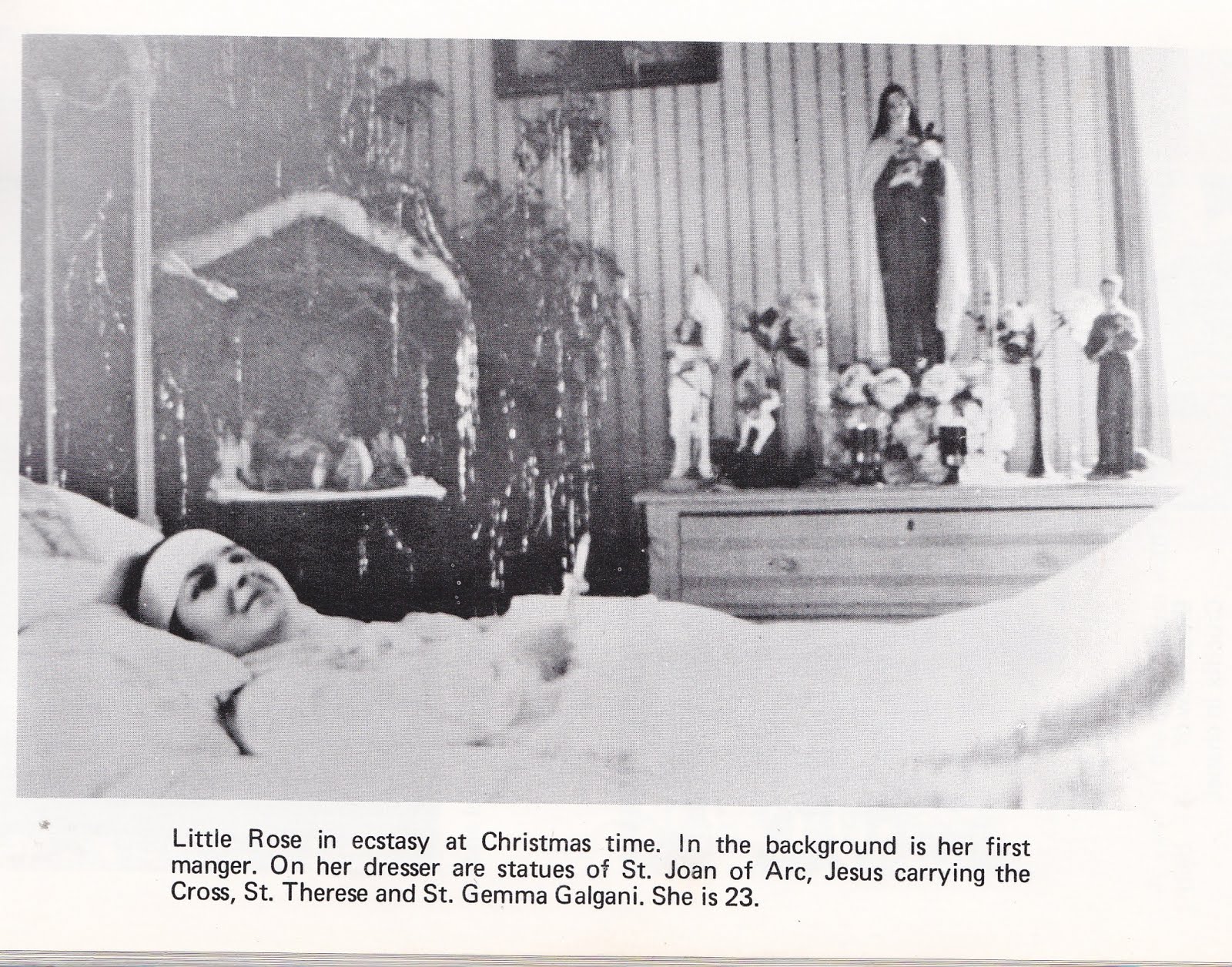 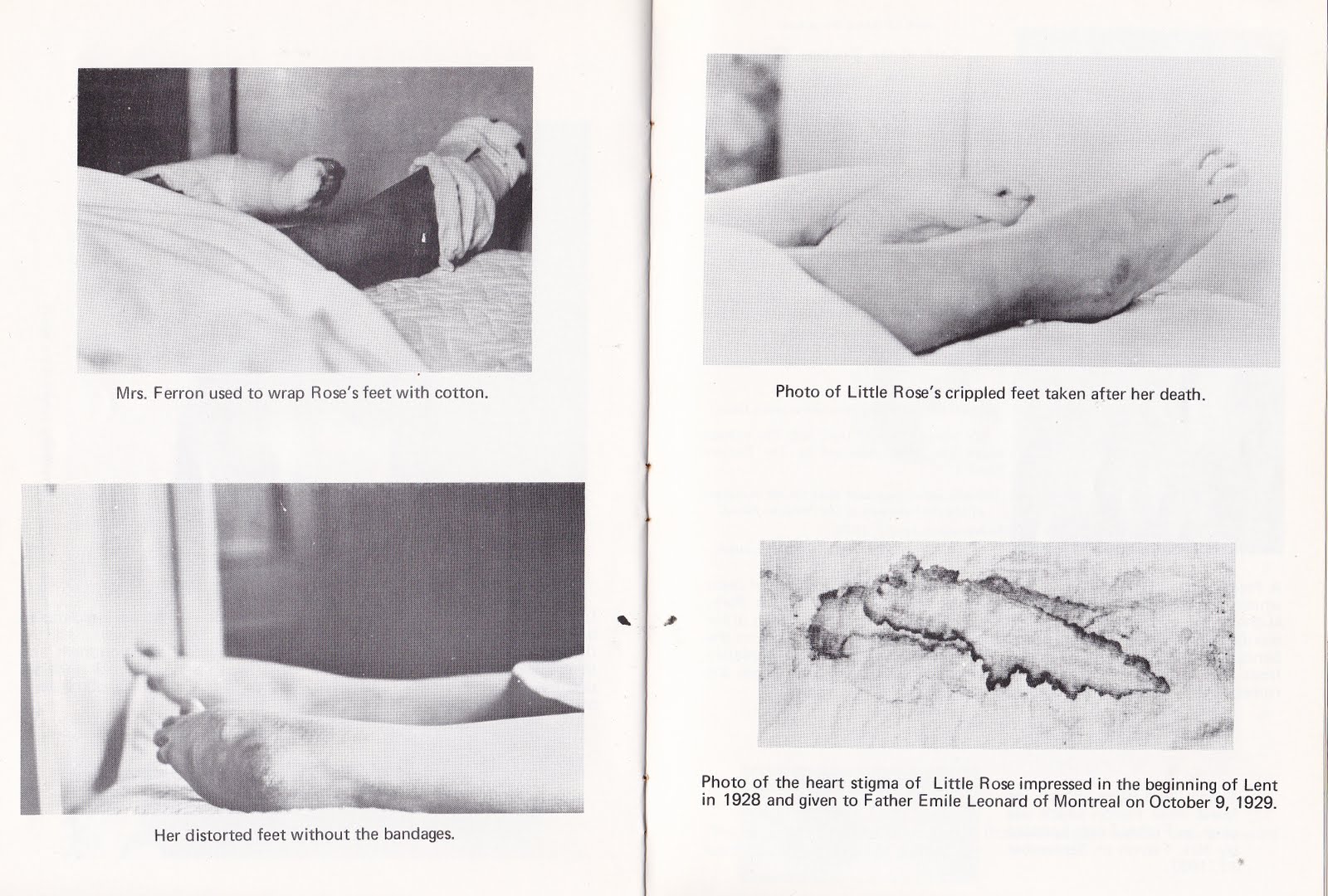 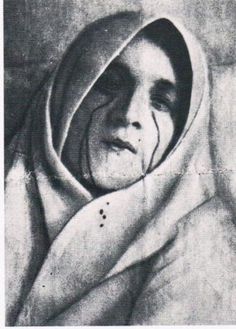 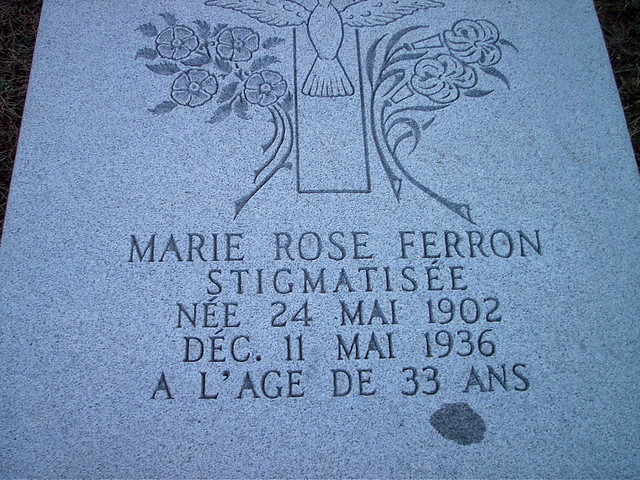 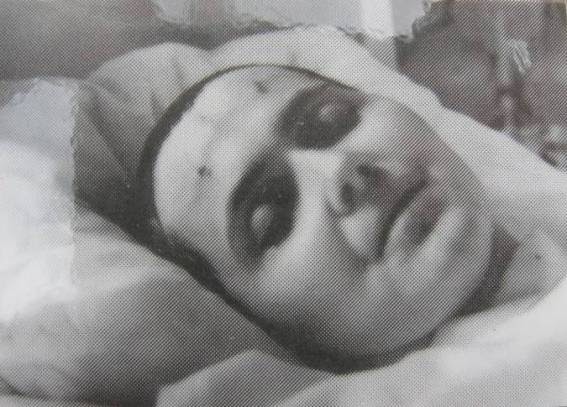 Baouardy wrote her brother, then living in Nazareth, asking him to visit her. The young male servant she asked to deliver the letter drew out of her the cause for her sadness. Upon learning of this, he attempted to woo her for himself, inviting her to convert to Islam. She rejected his proposal, which caused the young man to fly into a rage, in which he drew a knife and cut her throat. He then dumped her body in a nearby alley. Baouardy then experienced what she was convinced was a miracle. As she related later, a "nun dressed in blue" brought her to a grotto which she could never identify, stitched her wounds, and took care of her. Her voice was affected for the rest of her life as a result of the cut, which a French doctor later measured as being 10 cm. (nearly 4 inches) wide. After being cared for by this mysterious figure for a month, she recovered enough to leave and find work as a domestic servant in the home of an Arab Christian family in the city


Marguerite Bays (8 September 1815 – 27 June 1879) was a Swiss seamstress and Roman Catholic mystic who was a member of the Secular Franciscan Order
The stigmata was first noticed when she felt intense burning and noticed red blotches appear on her hands as well as on her feet and at her chest. Marguerite was subjected to a medical examination on 11 April 1873 and the doctor allowed for her niece to be present for the examination. Jules Grangier visited her at her home to see the stigmata for himself sometime in 1873 after issuing a series of requests made to see her. In her last weeks, she had difficulty eating or drinking and was capable of consuming only small amounts of herbal tea with milk and occasionally a light bread soup. Her condition worsened in the weeks leading into Lent of 1879 and she suffered from extreme pain during this period. Marguerite grew frail and thin and her brother Jean said she felt like a bag of bones when he had to lift her. At the time her true condition was unknown and it is said she remained silent in relation to her level of pain during this period. Her symptoms are known to have included acute pain in her head as well as her throat and chest. Marguerite died at 3:00pm on 27 June 1879 following several more weeks of acute pain.


CAUGHT FAKING!
Capuchin Saint Padre Pio of Pietrelcina
Francesco Forgione, OFM Cap., better known as Padre Pio and also Saint Pius of Pietrelcina (Italian: Pio da Pietrelcina; 25 May 1887 – 23 September 1968), was an Italian Franciscan Capuchin friar, priest, stigmatist, and mystic. He is venerated as a saint in the Catholic Church. Padre Pio became famous for exhibiting stigmata for most of his life, thereby generating much interest and controversy. On behalf of the Holy Office, Gemelli re-examined Padre Pio in 1925, writing a report in April 1926. This time Pio allowed him to see the wounds. Gemelli saw as its cause the use of a corrosive substance Pio had attached himself to these wounds. The Jesuit Festa had previously tried to question Gemelli's comments on stigmata in general. Gemelli responded to this criticism in his report and resorted to responding to his knowledge of self-inflicted wounds. He therefore clarified his statements about the nature of Pio's wounds: "Anyone with experience in forensic medicine, and above all in variety by sores and wounds that self-destructive soldiers were presented during the war, can have no doubt that these were wounds of erosion caused by the use of a caustic substance. The base of the sore and its shape are in every way similar to the sores observed in soldiers who procured them with chemical means." 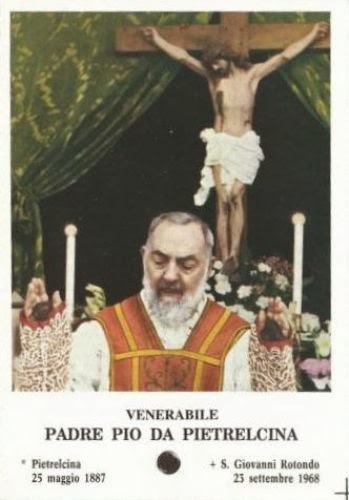 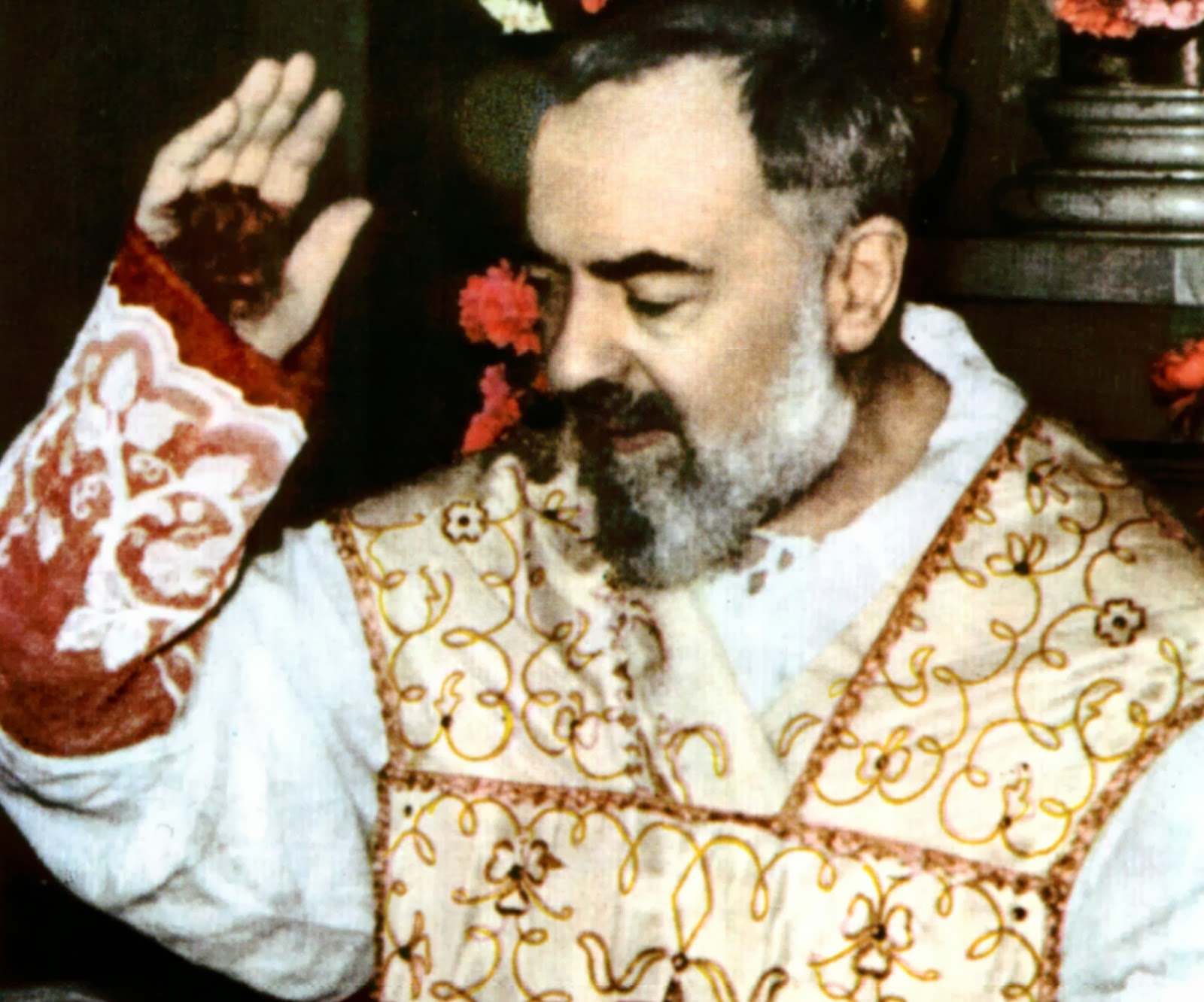 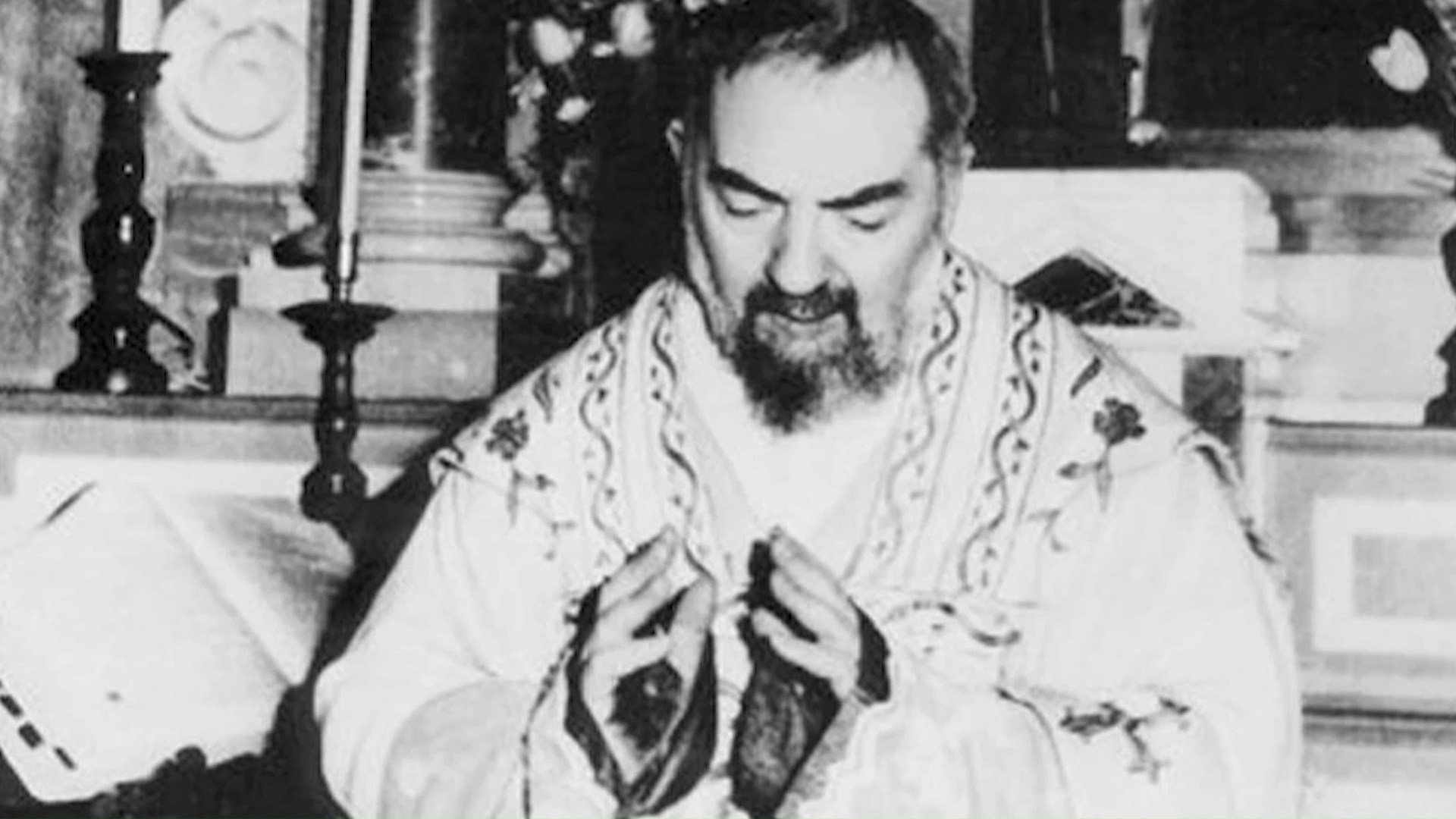 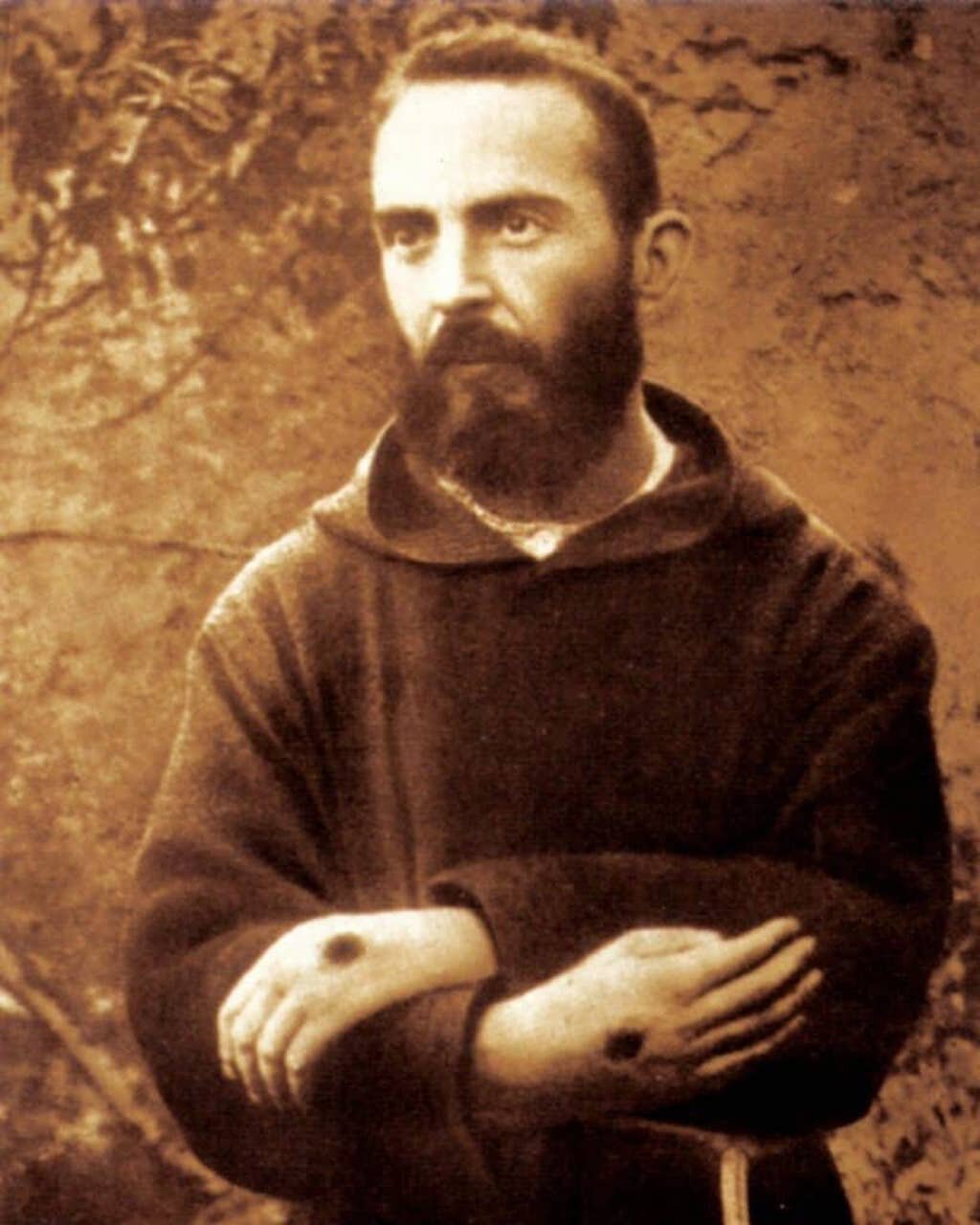 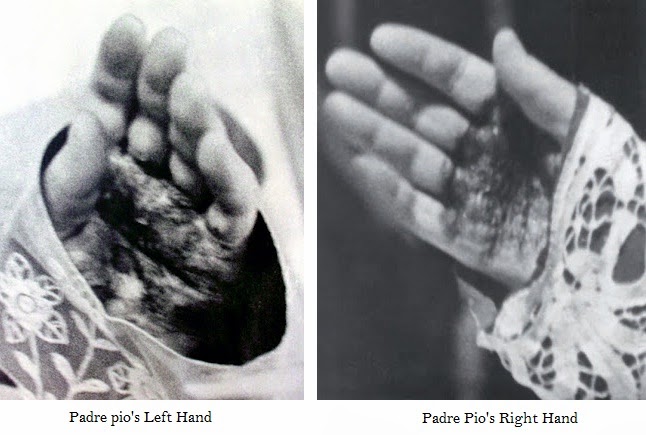 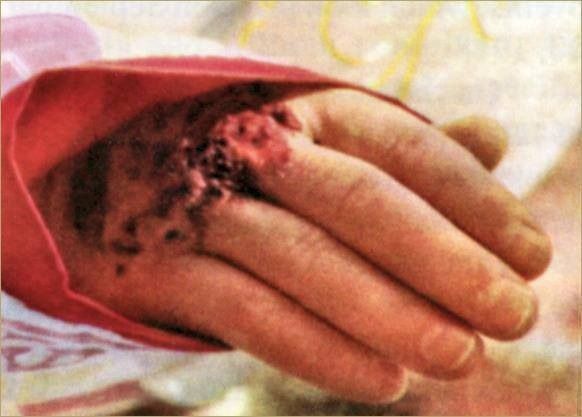 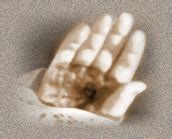 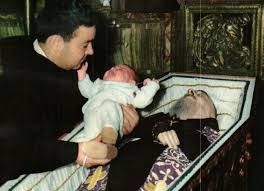 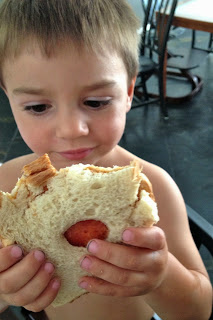 Investigations by medical and church authorities

Stigmata are wounds on the body that correspond with the suffering Jesus experienced during the crucifixion.

What are Stigmata?
Common stigmata include forehead wounds seemingly caused by a crown of thorns, marks on the hands and feet where Jesus would have been pierced by nails, and even marks across the arms and back similar to those Jesus bore from being flogged.

Most stigmata occurs in Roman Catholic circles. Stigmatists believe that by bearing stigmata, they are suffering with Mary, honouring Christ, and helping to pay the penalty for others' wrongdoing. They believe that God Himself is inflicting these wounds supernaturally.

However, stigmata go against the very nature of God. The atonement—Christ death and resurrection to pay our penalty—is worthless if humans are required to suffer Christ's wounds all over again. Scripture tells us that Christ died once, for all:

Hebrews 9:12, "Not with the blood of goats and calves, but with His own blood He entered the Most Holy Place once for all, having obtained eternal redemption."

Hebrews 9:26-28, "He then would have had to suffer often since the foundation of the world; but now, once at the end of the ages, He has appeared to put away sin by the sacrifice of Himself. And as it is appointed for men to die once, but after this the judgment, so Christ was offered once to bear the sins of many. To those who eagerly wait for Him He will appear a second time, apart from sin, for salvation."

Hebrews 10:10, "By that will we have been sanctified through the offering of the body of Jesus Christ once for all."

1 Peter 3:18, "For Christ also suffered once for sins, the just for the unjust, that He might bring us to God, being put to death in the flesh but made alive by the Spirit."

Some instances, such as St. Francis' hand and foot wounds, can be explained as the result of other normal medical issues. However, some stigmata cannot easily be explained away by science. They are deceptive wounds, inflicted by Satan.

Marie Rose Ferron
Marie Rose Ferron (1902-1936) was a Roman Catholic born in Quebec. For most of her short adult life, which was spent in Rhode Island, Ferron experienced terrible stigmata.

Bloody wounds appeared on her hands, feet, forehead, and arms, and Ferron would often pass out from the intensity of the pain. But according to one biography, she was happy to suffer, believing that she was suffering in order to take the punishment for other people's sin:

She found even love for the passion He was completing in her reduced body. As the story of pain unfolded with the months and the years, the realization that she was a victim grew more vivid.

"She knew that she was being tortured in the place of others and she accepted her vocation of bearing in her own body the physical pain spared them. In that, too, she resembled her Master, whose love prompted Him to bear mankind's punishment in its stead." Mystics of the Church: Marie Rose Ferron American Mystic-Visionary-Stigmatic," Mystics of the Church online.

Marie Rose Ferron died at 33 years of age, still covered in painful stigmata. If Jesus died once, for all our sins, is it necessary for anyone else to suffer the pain of the crucifixion? No. It is Satan—not God—inflicting suffering upon the stigmatists.

Pointless Pain
Many others have experienced similar symptoms to Marie Ferron. A young Syrian girl named Myrna Nazzour suffered intense and excruciating bleeding from her hands, feet, and head.

Stigmata is a declaration that the sacrifice of Christ is incomplete. Satan would love to have us believe that Christ is not powerful enough to provide salvation, and that we need to earn it ourselves. But it is simply not Biblical that anyone should suffer any longer in order to pay for the sins of the world.

The unfortunate truth is that these poor people are suffering for nothing. Their pain does not please God and is not atoning for any wrong done.

phipps said:
The unfortunate truth is that these poor people are suffering for nothing. Their pain does not please God and is not atoning for any wrong done.
Click to expand...